T-Regx is a lightweight, high-level library for regular expressions in PHP. It's designed to be suitable for simple projects and enterprise solutions.

The name "T-Regx" is a combination of words "Regex" and "T-Rex" (Tyrannosaurus Rex).

Main features of T-Regx are:

Surpasses PHP in many ways:

This example illustrates a pattern that allows us to match string enclosed in double quote " or a backtick `, for example "foo" or `foo`, but not "foo` and not `foo".

Additionally, we want the word to be anything we want, including data that potentially holds special regular expression values.

Method Pattern.test() returns true if, and only if a pattern matches the given subject. In this example, we can see that despite the dot character used in "my.word", the subject 'content with "my!word"' isn't matched.

That's because prepared patterns (such as patterns created with Pattern::inject()) treat each value literally, not as regular expression special characters.

You can read more about prepared patterns in Handling user input.

Because Pattern is designed with methods and objects, IDE suggestions can be very helpful when developing applications with Pattern. Proper suggestions from IDE reduce time spent of reading documentations and finding the correct syntax or notation. 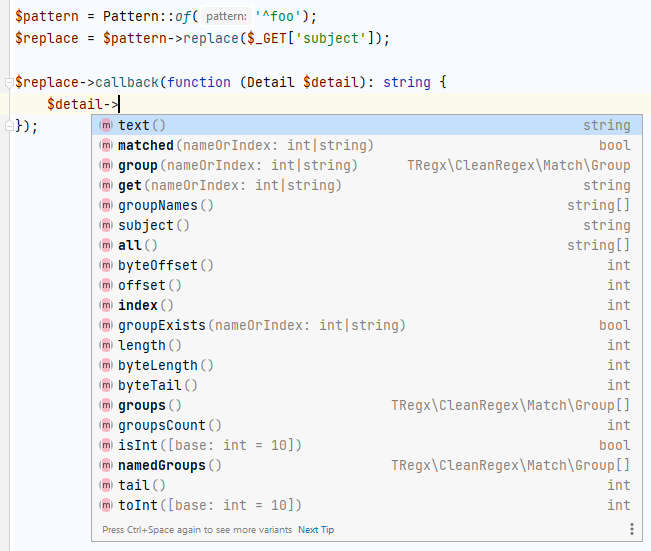 Examples of a missing group#

Examples of error handling in T-Regx#

T-Regx doesn't interfere with userspace in any way. After using Pattern or Matcher with pattern or subject which can't be matched because of malformed unicode encoding, or perhaps because of catastrophic backtracking, a suitable exception will be thrown, but the userspace will be left intact, so calling preg_last_error() won't return errors.